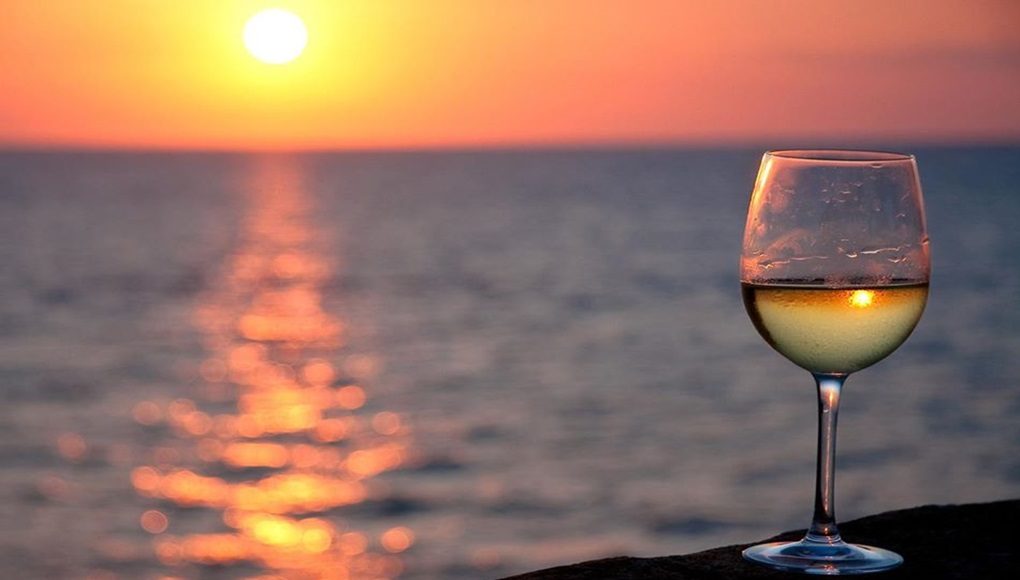 “That is what they were talking to each other at the time, however

the sun fell down and the Argites did their job,

and in the huts cattles were slaughtered, and they took them and dined

and they had wine from Lemnos, which brought many boats there,

sent by Jason’s son to the Achaeans, to Eunius,

the son that Ypsipyli  gave to Jason the king.”

The reputation of Lemnos wine with its intoxicating aromas is now international, especially its sweet wines, produced from its ripe grapes, have attracted international distinctions. It is not a coincidence that the king of Lemnos, Thoas, who according to the legend, was the son of Dionysus and Ariadne, taught the people of Lemnos the art of viticulture. The Moschato of Alexandria has been cultivated for centuries, while the ancient “kalampaki” or  “Limnio” has a history that is lost in the depths of time. It may go back to the years of the Trojan War, when the Achaeans supplied wine from Lemnos. Apart from its famous wine, Lemnos also has excellent tsipouro and ouzo, which accompany its appetizers and seafood delicacies. If you are lucky and you are on the island during the distillation period, from the middle to the end of autumn, live the experience of the “first try” in a Lakario, along with good company, appetizers, songs and dancing.

Lemnos, with its mild tourist development so far, and having most of the characteristics that a “Wine Road” should have (wine tradition and production, great historical, archaeological, cultural, architectural and folklore richness, strong environmental interest with wetlands, special fauna, areas included in protection networks) emerges as a model destination for the development of alternative forms of thematic and, in this case, wine tourism.

From the three islands of the former prefecture of Lesvos, the leaders  in terms of wine tourism belong to beautiful Lemnos, where the possibilities are great. Wine-loving travelers will find vineyards and wineries mainly in the area of ​​Atsiki, but also in the areas of Myrina, Moudros and Nea Koutali. In the area of ​​Agios Dimitrios-Atsiki is about 45% of the area of ​​the Lemnian vineyard.

THE HISTORY OF WINE IN LEMNOS 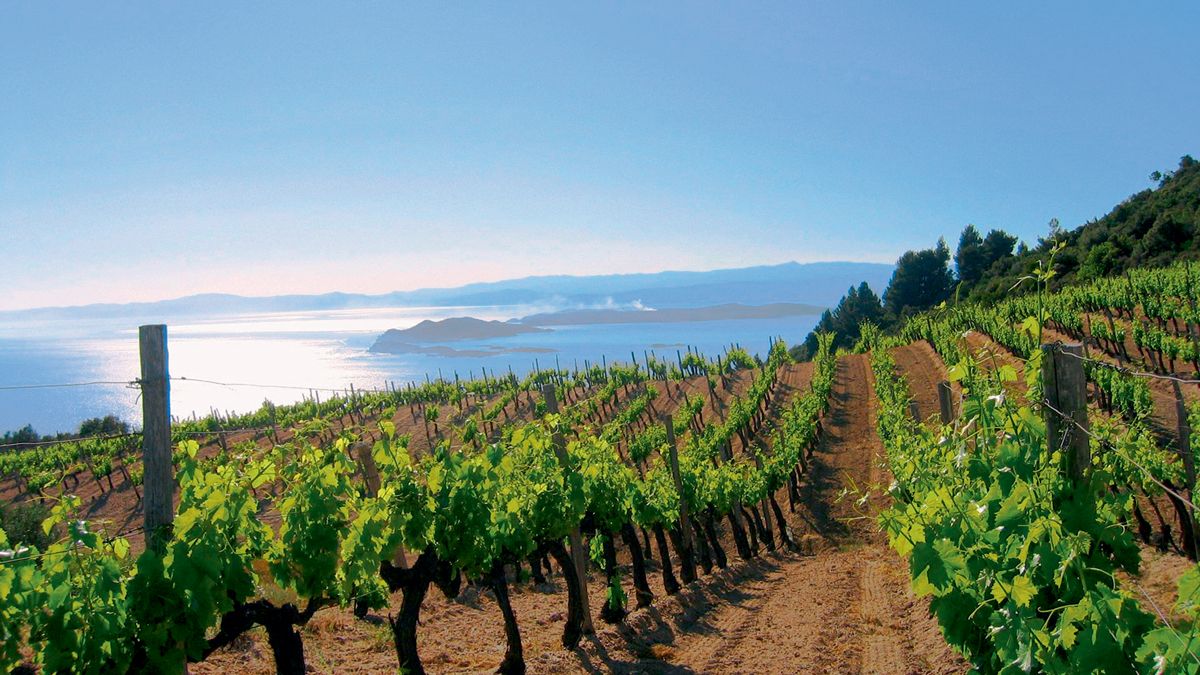 The imprint of the vineyard and its importance on the island was given by the connection of Hephaestus with the first king of Lemnos, Thoas. Lemnos with its vineyards and wine production is known to Homer, who mentions in the Iliad that the Achaeans, during the siege of Troy, rejoiced in drinking Lemnos wine. From then until today, wine, along with cereals, is consistently one of the main products of the island, with a sufficient surplus for exports. The importance of local wine production, the ancient inhabitants of Hephaestia have depicted it in some monetary denominations, sometimes with the head of Dionysus and sometimes with a bunch of grapes. 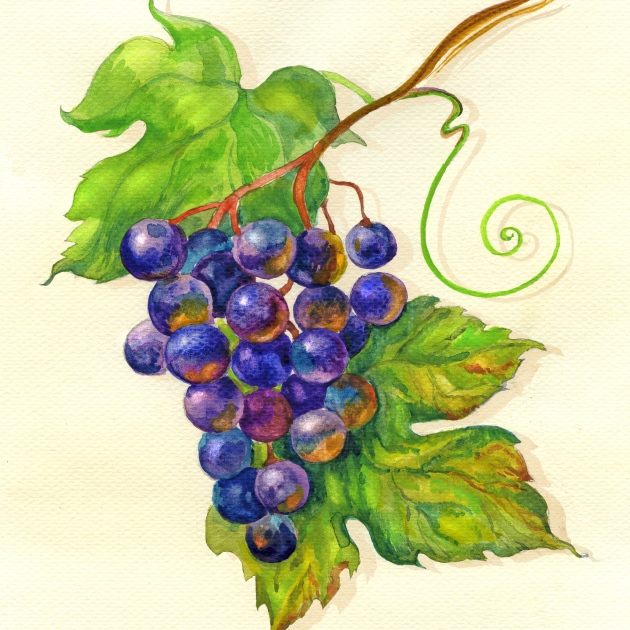 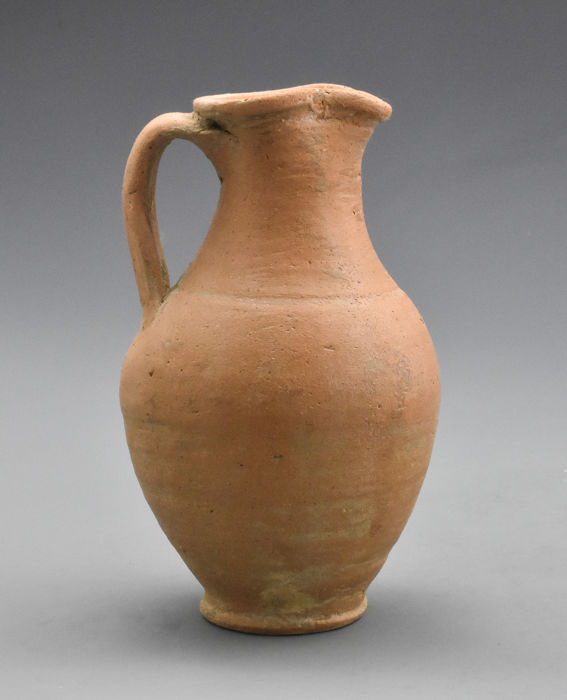 As most of the luxury wines of Greek antiquity were known by the name of their place of production, so does the wine of Lemnos. The first reliable and detailed testimonies about the vineyards and the level of wine production in Lemnos, dating back to the late Byzantine years (1261-1453 AD), concern the estates, mainly the metochia, of the monasteries of Mount Athos.

The most ancient variety of the island is the “Kalabaki”. With a grape the size of a nail, it has a lot of pits and intense pigment. Although it is tasty, it is not intended for eating, but only for making wine. The production of black grapes for “Kalabaki” spread to various parts of Greece, mainly in Halkidiki, where it acquired the designation of origin: Lemnio.

Until 1910, when the Alexandrian Moschato variety was introduced to the island (the locals call it English or English vines), only black grapes were cultivated, such as the varieties kalabaki, gdoura and fokiana. Today, the Alexandrian Moschato, being more profitable, has greatly sidelined the other local varieties, since according to official data, in 1992 it covered 95% of the total production. However, in the last 2 years, Moschato has been rationalized in terms of its production.

The volcanic soil (which is poor in calcium),  the climatic conditions, the hot and dry summers and the little rainfall, help the grapes of Lemnos to give both, Moschato of Alexandria and “Limnio”, high alcohol levels. 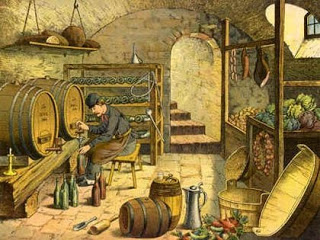 THE FESTIVAL OF THE HARVEST

Depending on the weather conditions, around September 15-20, the harvest was done mainly by women, while the simultaneous pressing of the grapes was done by men. The dense clusters of presses in Romanou and Repanidi were then transformed into a “noisy beehive”. With sympathy and mutual willingness, one family helped the other voluntarily in harvesting and transporting the loads from the vineyards, as well as in pressing the grapes. The first loads (1-2 donkeys) were pressed at will directly into the same pits, while the rest of the grapes were pressed into wooden or carved containers. Grapes (grape peel and seeds) and must were passed into the fermenter for fermentation and remained there for about one week.
Those who wanted ”brusκo” wine (dry with intense taste and rich in alchohol), left them longer, up to 40 days, closing the mouth with a stone cap. For pumping, they dipped a basket in the pit, strained the wine into it and, free of the marcs, put it in small easy-to-use containers or pumpkins. After the wine-making activities were over, the pits were thoroughly cleaned, left open until dry, and finally sealed, to be kept clean until next September. In the other villages of Lemnos, instead of carved wine press (gouves), they had large clay jars, which they put in the ground.

Gouva carved in stone, used as a place

for the fermentation of wine (Romanou).

THE TRANSPORTATION OF WINE 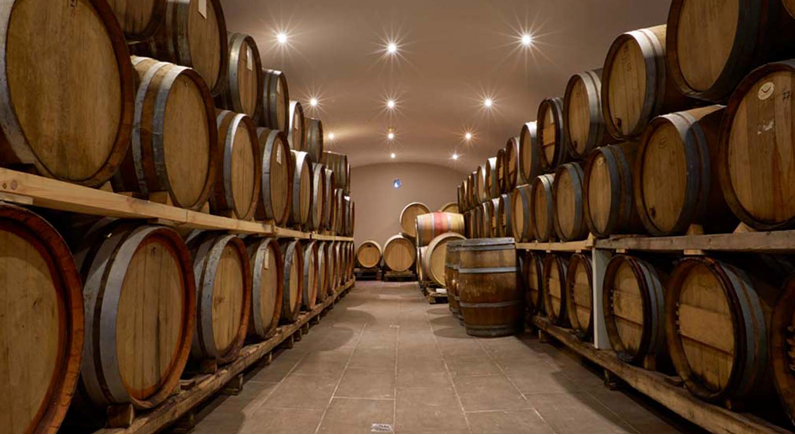 For transporting it to the house, where it was poured into small barrels, usually large bowls were used, the “surlades”. Surlades were initially imported to the island, but later began to be made in the tsoukalaria of neighboring Kotsina. To prevent the sorlades from breaking, straws and herbs were placed in the coffins.

Kratouna (pumpkin object for transporting wine from the pits to the barrels).

The preparation of the barrel, to receive the new wine, was complex: they removed the old wine sludge or gums, washing it well 2-3 times with water,which small pebbles were thrown into it, while then, for its most effective disinfection, sulfur candles were burned inside it (thick threads steeped in sulfur solution, which were hung from its upper large hole). The whole preparation ended with the washing of the barrel with scalding water, in which they poured rosemary, quince leaves, fennel, thyme and basil. In this way, they added to the barrels, but also to the wine itself, all these characteristic aromas.

After the pumping was completed, the remaining marcs were covered with a layer of dry seaweed to ensure the required moisture, they re-sealed the mouthpiece with the stone cap and straw, and left them like this for about 1.5-2 months. Then they were transferred to “lakaria” or “rokaria” (from the word “raki”), where, after boiling and double distillation, they took out the tsipouro.  Figs, raisins, barley, onions, corn, nutmeg, honey, mastic and mainly anise, were the ingredients that were added to the tsipouro, to acquire more sweetness and fragrance, but also the milky color after mixing with water. In Lemnos,  the double distillation of tsipouro that makes it richer in alcohol, is allowed since El. Venizelos visited the island. Tsipouro is considered the most up-and-coming viticultural product of Lemnos and is steadily gaining ground in the preferences of the friends of the island. Excellent quality ouzo is also produced in Lemnos. There are also some popular labels that you will find all over the island and in the Super Markets. 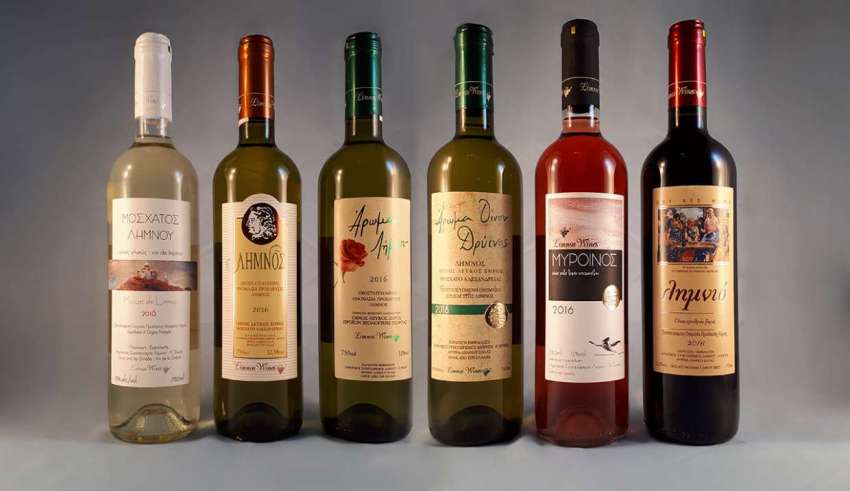 BRIEFLY THE VARIETIES OF THE ISLAND

1) The Moschato of Alexandria, which has relatively sparse and large grapes and in Greece is cultivated almost exclusively in Lemnos. These grapes are pitted and are extremely tasty, while, if dried in the sun, they give delicious raisins. The idea of ​​producing sweet wine from this variety is due to its ability to reach a high degree of sugar content. 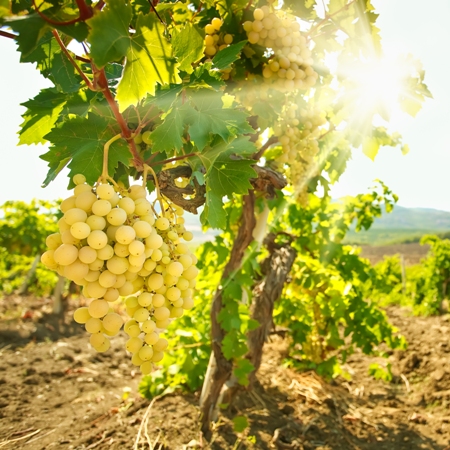 2) The red ancient Greek variety Lemnio, which is locally called “kalabaki” and is not recommended for eating. 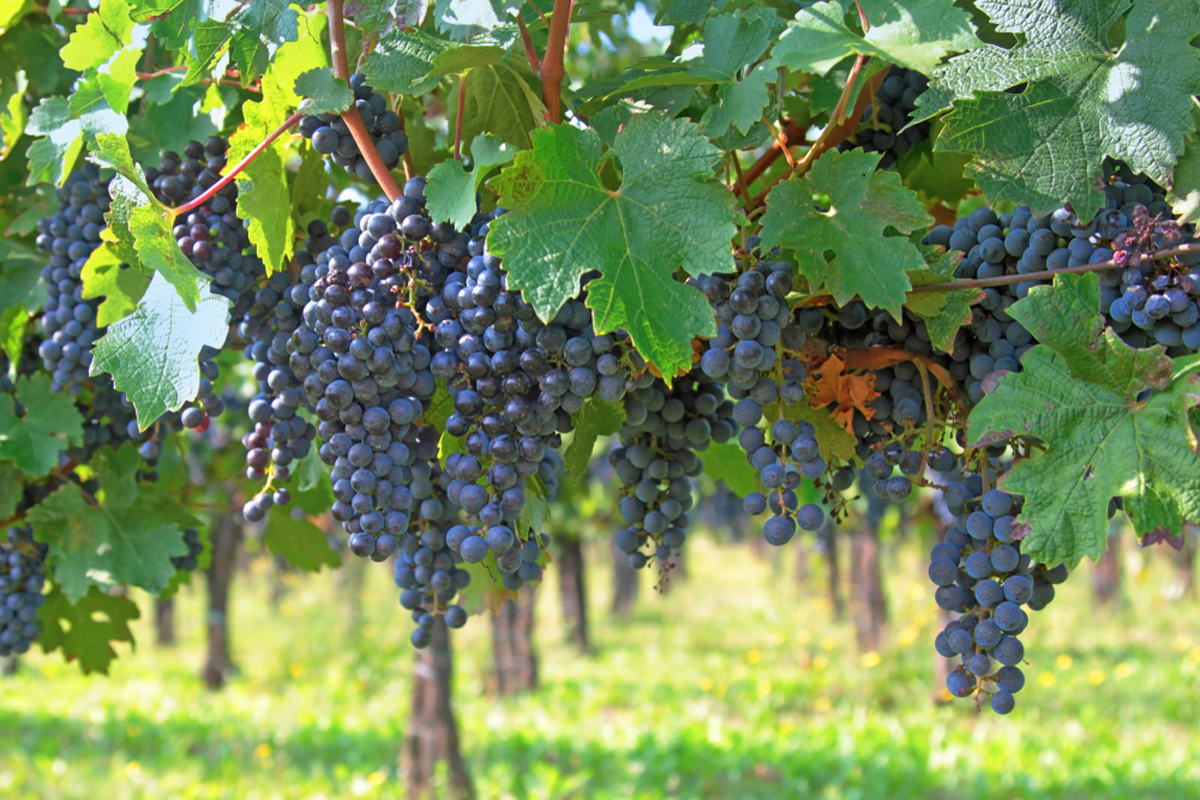 BRIEFLY THE WINES OF LEMNOS