The comparative advantage of Lemnos

Tastes and Scents of Lemnos 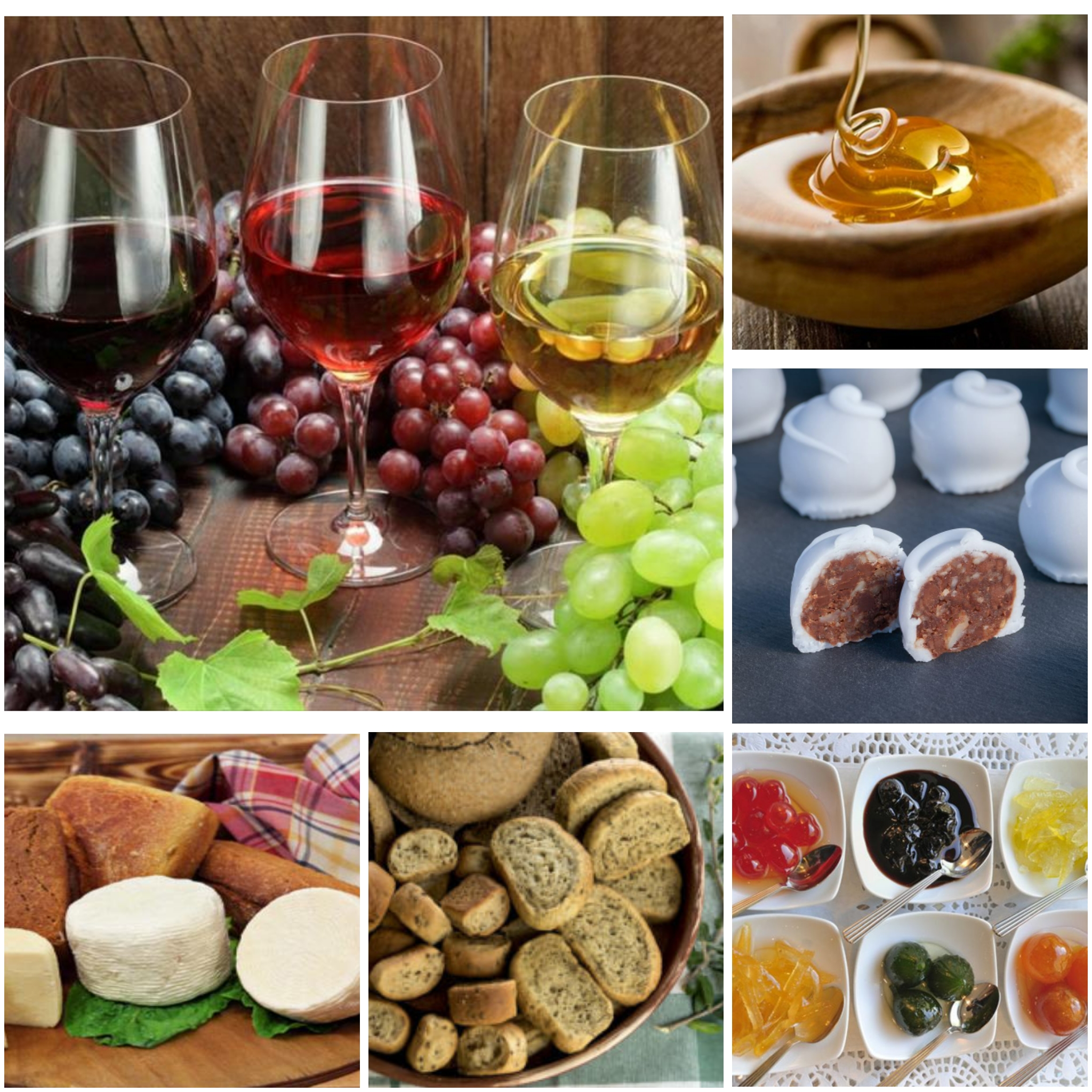 Wheat, honey and wine, the mother of Limnia Land …

Seasonal products of the ‘fertile Lemnia Land’ from the field, the orchard, the vineyard, the beehive and the producer’s herd, directly in the kitchen and on your plate. Traditional flavors, which masterfully combine the fish of the Aegean, the meat of free range animals with the herbs of the place. Dishes with a strong local identity that tell in their own way the history of the island, memories of uprooting Imam Baildi origin from Mikra Asia and the memory of a high visitor to the Venizelika Fontan.
Lovers of gastronomic tourism will chart your own thematic route in the fish taverns and restaurants of the island. In the local shops you can get local products to take the flavors of Lemnos with you. However, if you are a guest in a house in Limnia, you will gain unforgettable gastronomic experiences, as housewives using milk, flour, cheese and honey, masterfully make unique savory and sweet creations, even of the moment!

Traditional products of Lemnos Fresh cheese from sheep and goats that graze freely in nature with the saltiness of the sea carried by the wind. 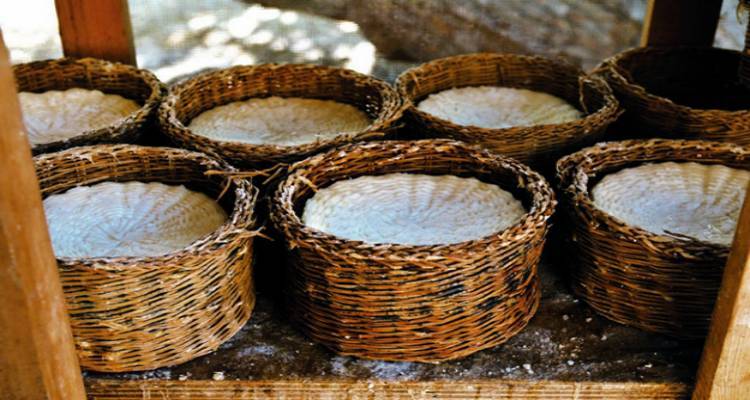 The Kalathaki of Lemnos is a rich in flavor cheese, which is produced exclusively from the milk of sheep and goats that graze in the meadows of Lemnos.
Its taste reminds the feta cheese, but it is not so sour. The quality of the cheese depends on the unique sheep milk of the island. The basket during its production is placed in knitted baskets to drain and then (after its dry salting) it is stored in brine at room temperature to mature. In the past, the cheese was left to coagulate in wicker baskets made of vourla, the so-called ‘turvolia’. The name ‘kalathaki’ comes from the shape of the cheese. 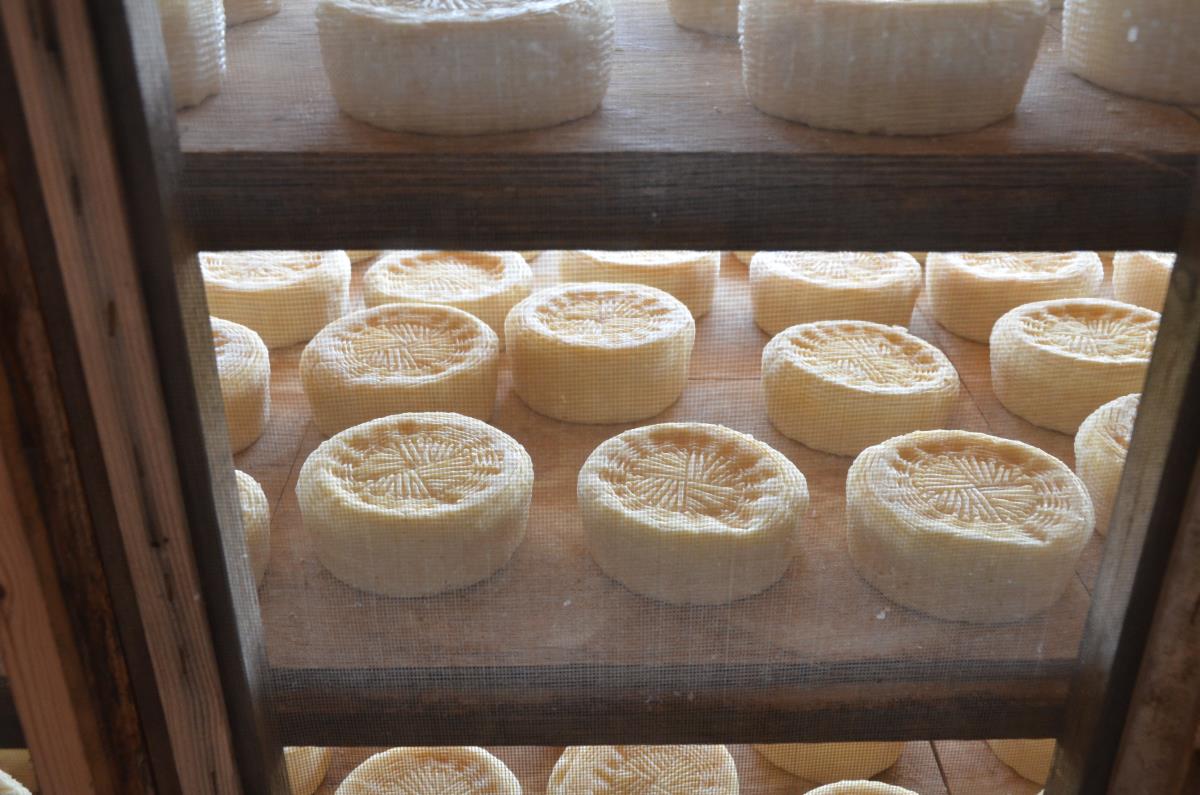 Melichloro is traditionally made in Lemnos from sheep’s milk. The main stage of its production is its drainage, which must be done in shady and well-ventilated areas and in periods when the humidity of the atmosphere is relatively low (end of spring and after). In this way the cheese is dehydrated. In the first phase, the cheese acquires a texture between green and dry, while when dehydration proceeds, the cheese becomes hard, is kept for months and is suitable for rubbing (in spaghetti, etc.). Melichloro is ideal for a table or for a frying pan.

The “leion”, a field sown with eclectic cereals offers nutritious breads rich in nutritional value to accompany delicious treats. The name “Lemnos”, according to one version, comes from the Homeric “leion”, which means sown field. So we understand that the production of grain in this corner of the world is lost in prehistoric times. The island was the granary of Athens in classical times, but also a supplier of the Byzantine imperial court.

Even today the largest area of ​​the island is sown with various grains, mainly wheat and barley. On a smaller scale of production we can find old Lemnos varieties, such as wheat mavragani of Lemnos, as well as barley of Panagia. They made, using as raw material the grains they produced, many and … various: flour, bread, rusks, pies and sweets, but also their pasta, flomari, trachana, valanes, aftoudia, oatmeal.

Flomari and trachanas, handmade pasta from durum wheat varieties, were a staple meal for traditional households. 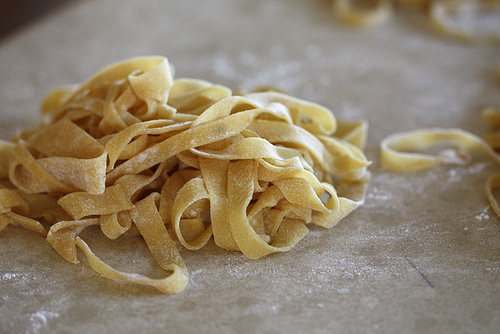 Flomari is the traditional noodle of Lemnos. This is a local pasta cut into very small pieces ‘like small matches’ (as Ourania Vagiakou used to say). It is prepared with lemnian flour (mixture of wheat flour, white flour and semolina), many village eggs and lemnian sheep’s milk. Flomari is used in many traditional Lemnian recipes, with or without meat, as well as for soups with tomatoes, vegetables or milk. 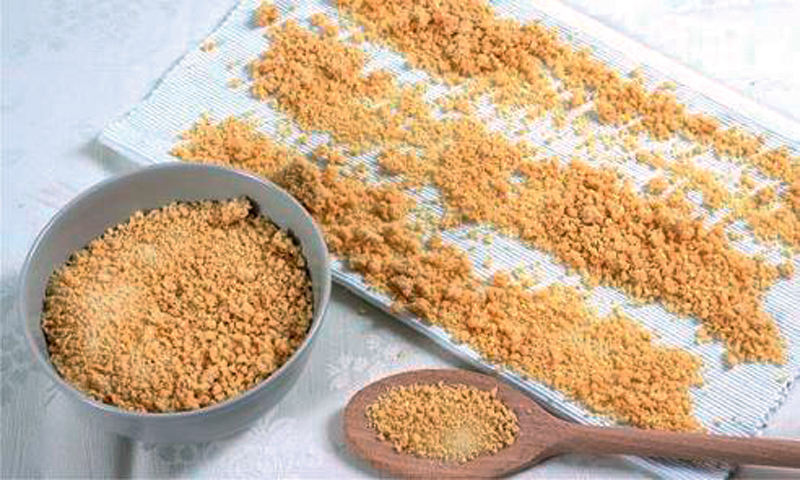 The traditional Lemnos trachanas is made from coarse semolina or ground wheat. In some houses they even use a stone hand mill to grind the wheat. The ground wheat is mixed with milk or sour milk, dried in a shady place that is ventilated and then passed through a sieve (dermoni), until it becomes quite fine … like sesame! Trachanas is boiled plain or used instead of rice in various soups (chicken soups, etc.). Also used in pies.

Sweet temptation to the syrupy samsades and venizelika which housewives of  Lemnos made in honor of El. Venizelos. 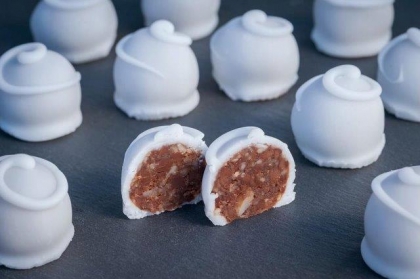 Venizelika is a dessert created by the housewives of Lemnos made for Eleftherios Venizelos when he visited the island  after its liberation,in 1912. You will find genuine Venizelika everywhere in Lemnos, since here is the place of their production.

Samsades is a traditional dessert, which was made mainly at Christmas. It is quite similar to baklava with the difference that it is more difficult to stop eating if you find yourself in front of a pan with these traditional delicacies.

The “amigdalota” and the sweets of the spoon from almost all the fruits have the taste and the aromas of all the delicious fruits of the island.

Sweets – treats, which have almonds as their main ingredient. We find similar sweets in every corner of Greece. In Lemnos, macaroons have always been very popular, since the island was (and is) full of almond trees with excellent quality almonds. 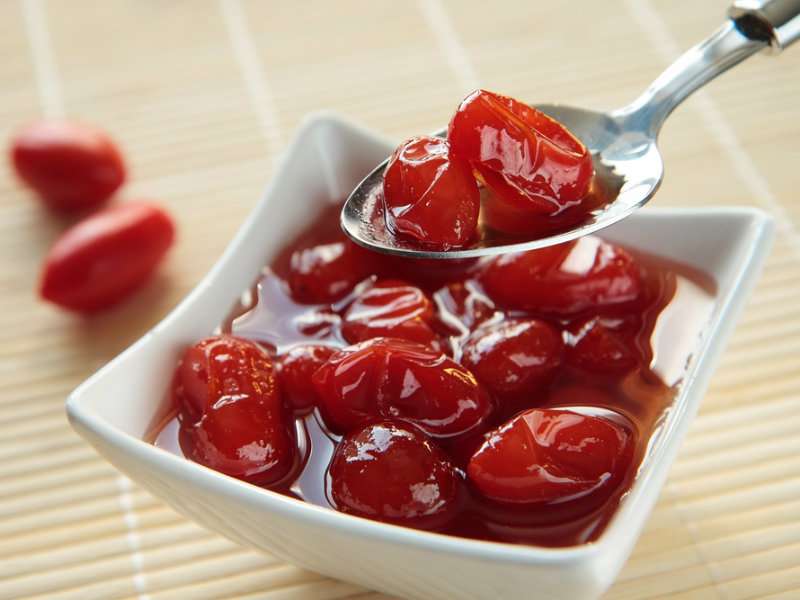 In Lemnos you will find “spoon sweets” from almost all fruits, which are prepared by small crafts. Our favorite flavors are wild fig, grapes, quince and tomato! 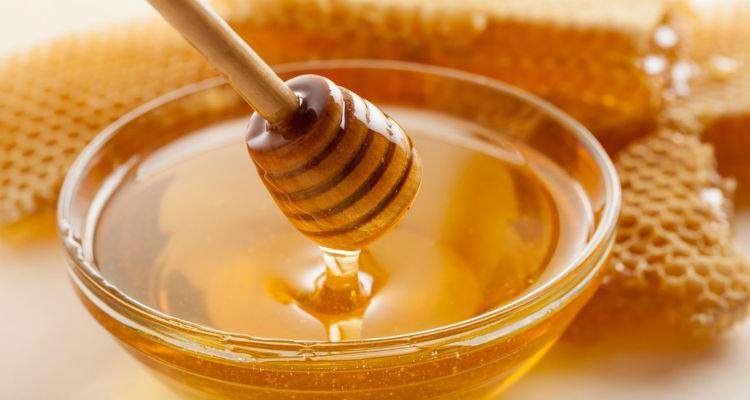 The characteristic full taste of amber honey encloses the smell of the golden thyme places of the island. Beekeeping is an integral part of the long history of the island. Undeniable witness is the clay smokehouse found in excavations and adorns the collection of our archaeological museum.
Also important are the “Varadia”, the traditional hives of Lemnos were the beehives of the island. Lemnos today has to present a beekeeping quite active against the demands of our times, with amateur beekeepers and professionals, who give their best to enjoy the thyme honey of Lemnos.
Thick honey, with wonderful aroma, golden color and intense taste. Lemnian honey is distinguished for its purity in thyme. This is the reason why lemnian honey is one of the best in our country. So who does not want by leaving to take with him a jar with smells and colors of the lame nature? After all, a spoonful of pure thyme honey gives us energy and well-being like no other product. 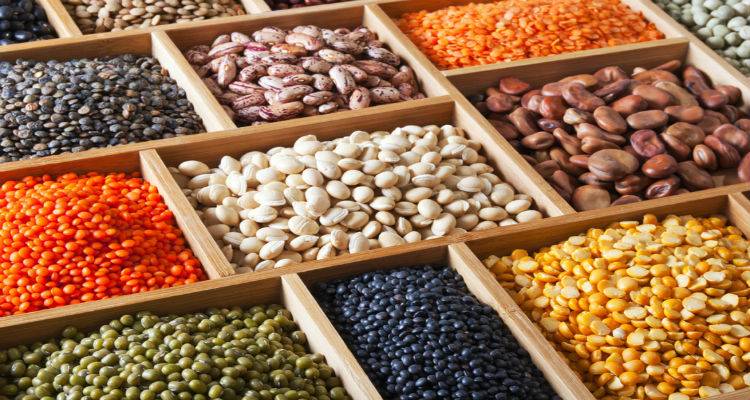 The special climatic conditions, as well as the fertile soils of the island can give us almost everything! Traditional varieties of plants that have adapted to this corner of the Aegean exist in cereals, vines, but also in vegetables and legumes. Apart from the wheat and barley of Lemnos, it is worth looking for the avko, the fava made from lathouri, string beans, but also black-eyed, small but very tasty, chickpeas of the Virgin and much more!

The history of Lemnos wine

The “local vine” with its aromatic juices and sweet fruits delights the heart with varieties of wine, ouzo and tsipouro. The sweet wine of Lemnos was about to overturn even the outcome of the Trojan War! In Homer’s Iliad, General Agamemnon tells his warriors that, instead of putting them to the battle with one hundred and two hundred Trojans as they boasted earlier, they sit and sip a cup of sweet wine from Lemnos in overflowing glasses. In H’ Rhapsody of the same epic we have reports about the strong … market value of Lemnos wine as a spare item.  So exquisite and sought after that the Achaeans exchanged it with each other and gave copper, iron, oxen, and even slaves, to secure vultures full of wine from the “vineyard” of Lemnos. The Lemnian vine growers can rightly boast that they learned of wine first hand, by the son of Dionysus and the first king of the island, Thoas, as “Dionysus fell in love with Ariadne, and the commissa in Lemnos mingled and gave birth to Thoanta, Stafilon and Oinopiona”.
During the years of the Argonaut campaign, Jason with the bravest men sails for the grandiose plan of conquering the golden fleece in Colchis. The Argonauts make their first stop on the journey for wine in Lemnos. The dance of the farmers of Attica in Aristophanes’ “Peace” is enthusiastic, while the travelers who passed through the island in the 17th and 18th century seem to have “honored” the local wine. In their notes on Lemnos, along with references to the churches and other monuments of the island, European historians definitely talk about the unique, in aroma and taste, wine that they were kissed and tasted in Lemnos. 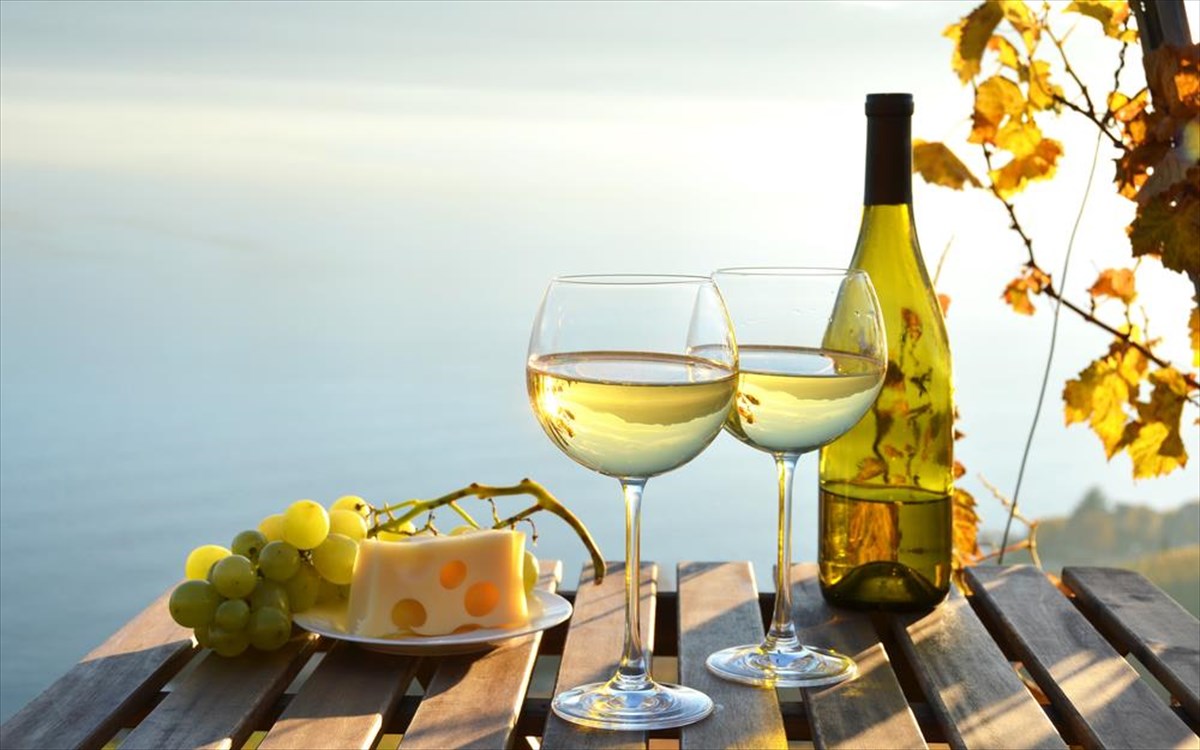 Moschato is a white variety, which is widely cultivated for the production of table grapes, wine and raisins. In Greece it is cultivated mainly in Lemnos and Samos. This variety is easily oxidized and requires special attention during winemaking.It matures at the beginning of September and gives dry wines with several degrees and moderate acidity. The vineyards of Lemnos give white wines with a delicate aroma and pleasant taste, as well as wonderful sweet wines with rich aroma and full taste.
All white wines from Alexandria muscat are OPAP (Designation of Origin of Superior Quality). The white wines of Lemnos have won many awards in international competitions, while they are very high in the appreciation of demanding consumers. 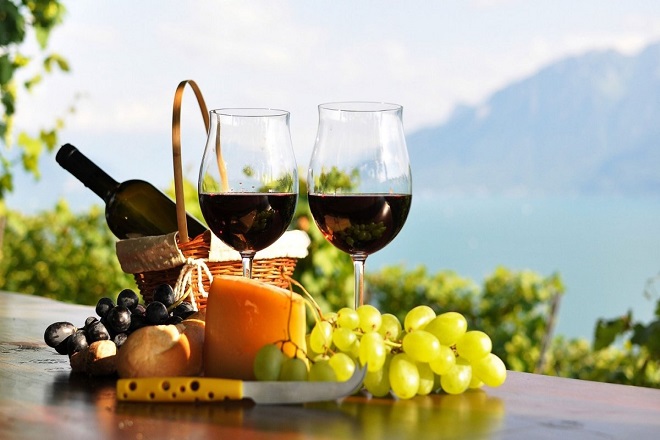 Limnio is an ancient Greek variety of dark grape used exclusively for winemaking. It is probably derived from the Limnio grape, mentioned by Hesiod and Aristotle.It is a variety with increased resistance to diseases and drought, which is why it has been preserved over the centuries. This variety can give, with proper vinification, red and rosé wines of very good quality. 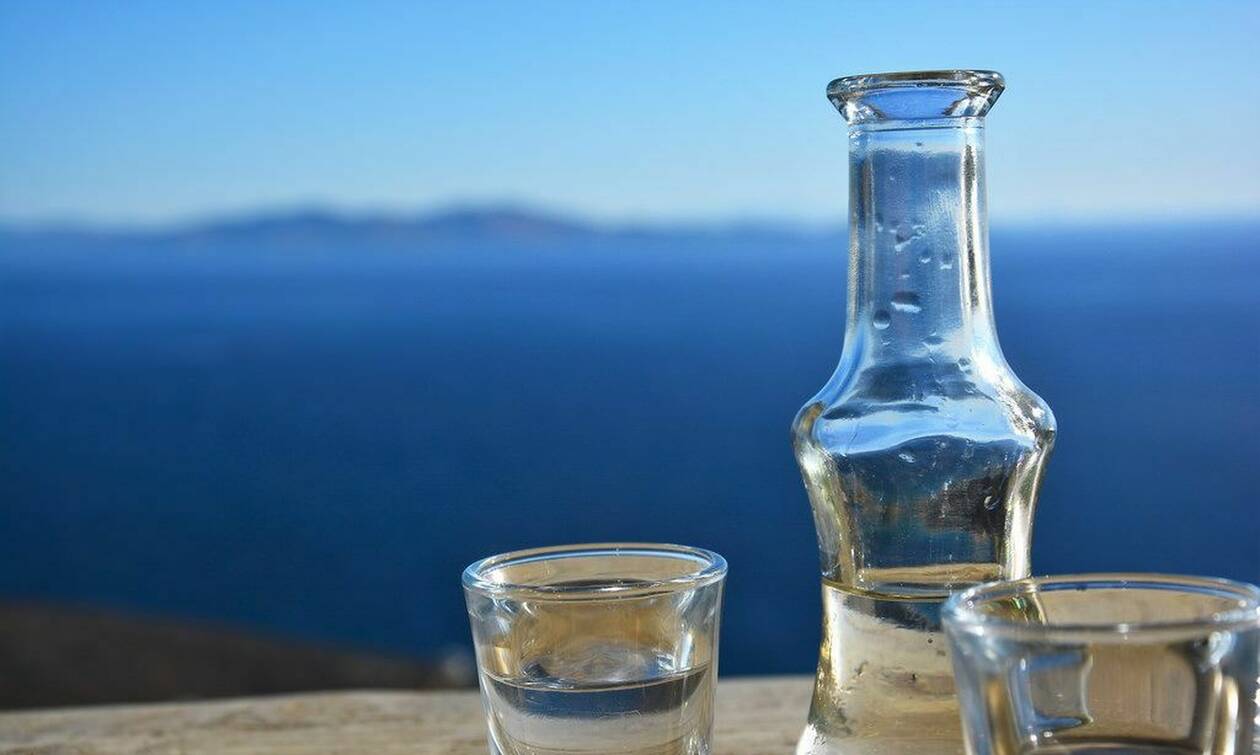 Monovarietal, double distillation with or without anise, from 100% grape distillate of Alexandria, Lemnos, a variety that thrives uniquely in the volcanic soils of Lemnos and is known worldwide for its excellent taste and rare scent. The production of Lemnos tsipouro is done in the traditional way of tsipouro production, without chemical impurities.Try it for its unique taste and exciting aroma. Lemnos tsipouro or raki, as mentioned, is a double distillation product. Although this process was forbidden, it became known that during the liberation of Lemnos in 1912, Koundouriotis and Venizelos visited the island and tasted the raki, allowing the continuation of the double distillation, which is allowed in a few more areas of Greece. 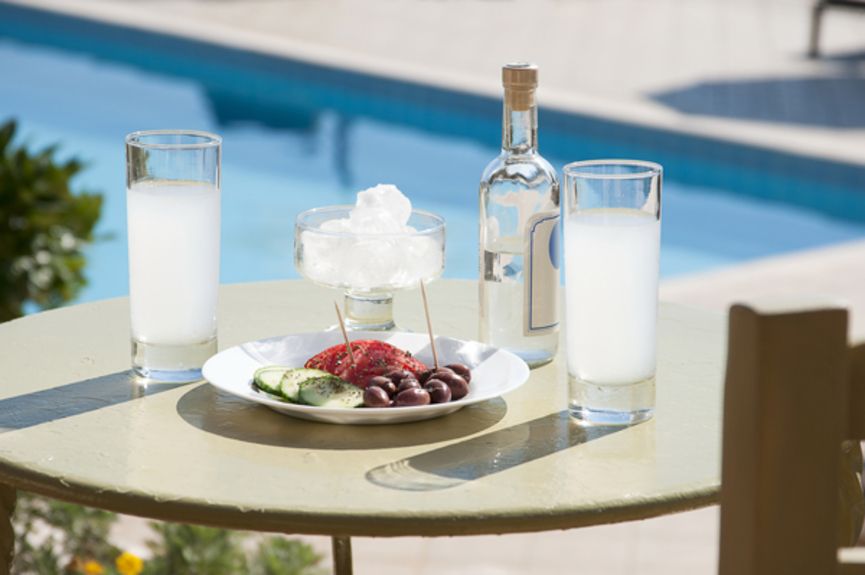 Ouzo is made from alcohol after mixing it with various flavors, its production can take place throughout the year while tsipouro is made from grape alcohol, two months a year. Today it is made with anise but also without due to demand from visitors to the island from Northern Greece. And it comes to our glasses with the triptych of its success: the art of double distillation, the Lemnos taste and the Moschato of Lemnos.

The comparative advantage of Lemnos