For those of you who are interested in getting to know Lemnos better, our excursion includes incredibly unique and spectacular destinations that are inaccessible with a normal vehicle. This tour gives you the chance to explore and discover the rare natural beauties that Lemnos has to offer. 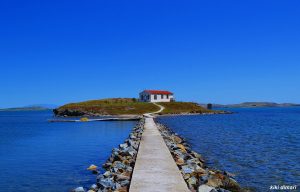 r excursion starts at 9 in the morning. Our first station is a little island called Pounta right across Nea Koutali, the village of sponge divers. The village was built by the refugees from Propontida and it’s one of the very few villages that maintained its population in the post-war period. The church of Saint Nicholas is a unique sight, since it is built on a little island.

We continue with destination the north-east department where we will visit the archaeological site of Hephaestia, the second most important city of Lemnos, after Myrina.Hephaestia, the largest and most ancient-during the historical times-city of Lemnos (1000 b.C.-1200 a.D). It was one of the two city-states of ancient Lemnos. Protector of the city was god Hephaestus. The archaeological excavations were able to reveal among other things the sanctuary of The Big Goddess, necropolises, baths, a big residence-possibly a palace and a completely restored Hellenistic-roman theater that was inaugurated just in 2010.The construction of the stony theater is ranked within the most ancient of the Greek world, is placed at the end of the 5th or at the beginning of the 4th century b.C. 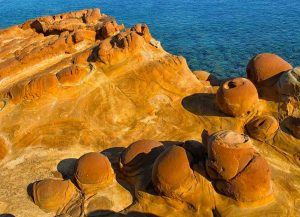 er the guided tour we make a stop at the beautiful square of Kondopouli to enjoy our morning coffee and afterwards we pass by the beautiful villages Repanidi,Kotsinas,Varos and Atsiki,we will arrive at the north section of the island and end up in Propouli.There we will see a rare geological park, attraction of unique beauty, Falakra or Farakla, which is consisted from various rocky formations of special geomorphological value that give off the impression that they are carved like sculptings. These rocky formations are considered to be formed by the running hot lava of volcanoes, which froze and formed uncannily rocks when it came in contact with sea water. We will admire these geological formations and we will take photos, enjoying nature’s creations.

After we pass through 3 kilometers over the village Katala 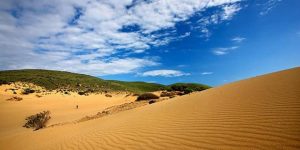 kko and near the beach Gomati we will see the popular Sand Dunes,the famous “Sahara of Lemnos” an area of approximately 70 acres. Sand Dunes are considered a greatly rare and other-worldly landscape with minimum vegetation that continuously attracts more and more explorers of extraordinary natural landscapes.The strong north winds reshape constantly in the form of the sandy golden mountains, resulting in an unusual visual spectacle, in contrast with the vivid blue sea.